Jim Moore’s creation and development of his own wine label - Uvaggio - is a gratifying personal achievement. His approach to winemaking seeks to optimize each vineyard’s potential by using rather basic and straightforward techniques to craft distinctive wines from lesser known grape varieties grown in the New World.

His winemaking style is as much Mediterranean as it is Californian Tasted blind, one might actually imagine they come from regions bounded by the Adriatic or Tyrrhenian Seas, not the Pacific Ocean. These are not typical wines from a typical winemaker. 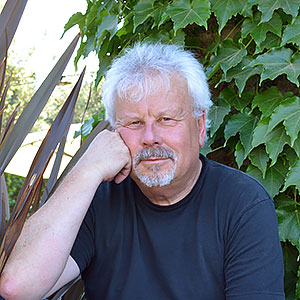 With a career spanning four decades and having vinified grapes from most of California’s diverse regions (and in several parts of Italy) and across a broad range of cultivars (everything from Arneis to Zinfandel), his winemaking experience is prodigious, differentiating the Uvaggio wines from California’s typical, Franco-centric offerings.

Jim’s interest in Italian grape varieties began long before Pinot Grigio became ubiquitous in the market.  While working in restaurants during college, followed by managing a fine wine retailer, his exposure to a vast spectrum of the world of wine inspired taking up a career in winemaking.

In By  1979 Jim had joined the Robert Mondavi Winery in Oakville and spent two decadess at what was then perhaps  California’s most renowned, if not iconic, winery.  Working for such an innovative and dynamic winery lead by a truly  inspirational founder, afforded many benefits. In conjunction with course work in winemaking and wine business at UC Davis, his efforts resulted in several career milestones. Among them, he envisioned and developed La Famiglia di Robert Mondavi in California, while helping to  launch Luce and Lucente from Tuscany - a collaborative effort with the Frescobaldi family of Florence.

Some of his other accomplishments included developing two vineyard trial blocks to evaluate the performance of Italian and Rhône varieties.  He also helped to develop the company’s Burgundian-inspired, Carneros appellation Chardonnay and Pinot Noir.  Jim reintroduced Zinfandel to the portfolio (from Napa Valley’s miniscule old vine sources) and totally revamped the style and packaging for Moscato d’Oro.  His efforts earned many accolades, including three Wine Spectator Top 100 Wines of the Year, as well as a coveted “tre bicchiere” from Gambero Rosso, Italy’s pre-eminent wine guide.  After being promoted to Assistant Winemaker, he was tasked with helping to elevate the quality of Mondavi’s entire Napa Valley portfolio and planned cellar renovations.

In 1998, Moore left Mondavi to develop l’Uvaggio di Giacomo, which translates as “the Blends of James” (or in other words “Jim’s Wine”) which he had begun with the 1997 vintage. He also served as the consulting winemaker for several new Napa Valley start-up ventures, along with helping revive the fortunes of a small, family winery in St Helena. Seeking a break from Napa Valley, in early 2003 he became Director of Winemaking for Bonny Doon Vineyard/Ca’ del Solo, only leaving to devote himself full time to revitalizing his Uvaggio project.

Today the Uvaggio label is a vinous statement four decades in the making.  The diverse portfolio consists of a range of wines,  though focuses  on Vermentino and Primitivo.  Emphasizing attributes like vibrant flavors, moderate pricing, lower levels of alcohol, and balanced expressions,  these are wines crafted for food affinity and daily enjoyment, bringing an Italian sensibility to the American table. With a belief that wine’s primary role is to accompany a meal, the success of the Uvaggio rests on three important attributes - their accessibility, harmony and value.

Jim Moore is a graduate of UCLA and has traveled extensively in northern and central Italy  and for several years worked side-by-side with winemakers  in Tuscany. Valuable time was also spent during repeat visits to France’s Burgundy and Bordeaux regions.  Jim resides in Napa, endeavoring to explore new  vinous horizons daily.

"This bright and concentrated wine combines ripe apple and peach in equal proportions, with lively herb and mineral notes. It has a refreshing balance and vivid...